Partners Mike Goebig and Dwayne Knowles opened the doors at Broadmoor in 1986. The 50-acre facility is home to some of the most magnificent Morgan show horses in the country. In addition to training and showing, they stand four breeding stallions. Though their backgrounds are different, they share a common goal for Broadmoor, and provide first-class training, showing and breeding services to their clients from around the world.

Throughout this time, both men won numerous world and national championships with horses in their barn. This success of winning impressive show ring championships by pairing the right horses with their amateur and junior exhibitor riders continues to this present day.

In addition to their success in the show ring, both Mike and Dwayne donate their time to clinics, sharing their knowledge of training and showing Morgan horses with others. They also donate their services to various fund-raising auctions in the Morgan world. The barn is also open to area 4-H and other youth groups, who want to learn more about the Morgan horse. 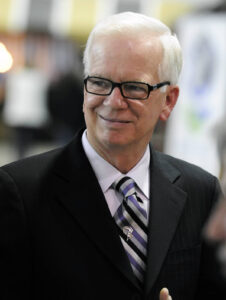 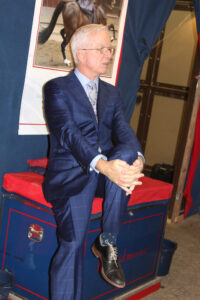 Growing up in the northwest section of Philadelphia, Mike’s greatest influence was his father. He shared his love and passion for horses with Mike. His mother showed Parade horses. Mike bought his first Morgan when he was 11 years old, Tas Tee’s Indian Summer.

Mike began showing his horse and a few others. When attending all-breed shows in the Mid-Atlantic region, he avidly watched trainers such as Tom Moore, Sullivan Davis, and John Lydon. He also spent a summer in Illinois working for Doris Ryan.

By 1973, Mike had his own training stable in Coopersburg, PA, beginning with seven horses in training. He operated here for ten years, before moving to Louisiana to work for Sally Longenecker of Saralin Farm. Soon the decision was made to open his own facility again, and Broadmoor was born.

For years, Mike has been involved with club functions, having served both the Mid-Atlantic Morgan Horse Club as its president and Board member, and the American Morgan Horse Association as it’s president and Board members. Mike was inducted into the AMHA Hall of Fame jn 2007, was a recipient of the AMHA Golden Reins Award in 2001, and won the USEF Equestrians of Honor award and the C.J. “June” Cronan Trophy in 2005.

Mike’s hobbies include gourmet cooking, traveling and a strong interest in history.

Back in Coopersburg, there was a young groom who would ride a grade horse to the barn to work for Mike, mucking out stalls and helping with the feeding process. Eventually Dwayne learned how to work with some of the horses. While attending college, Dwayne spent his summers in Louisiana at Saralin working for Mike, before going out on his own as a trainer working for Nona O’Brien and her family at Limerick Morgans in Virginia.

Dwayne is an accomplished USEF large “R” judge, and is licensed to judge Morgans, Saddlebreds, and Saddle Seat Equitation. He has judged many shows throughout the United States, and in 2006, judged the European National Horse Show in England. 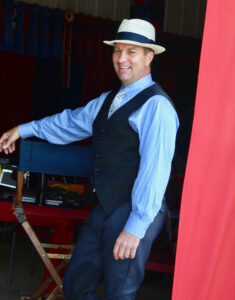 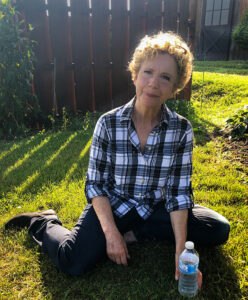 John’s journey into the horse world began while growing up in Bethany, Connecticut, and taking riding lessons at a local all-breed stable. It wasn’t long before he acquired his first horse. He competed at local shows throughout Connecticut, and in 2013, John ventured onto the ‘A’ circuit” showing CBMF Ricochet. They culminated the year winning the Connecticut Morgan Horse Association Classic Pleasure Saddle Horse Championship.

After working with several different breeds in several disciplines, John loved Morgans for their eager-to-please attitude and style. He led his first Morgan to Reserve Grand Champion Stallion honors at the 2016 Mass Morgan Show. After selling the stud, he was offered the opportunity to travel to Oklahoma to the Grand National & World Championship Morgan Horse Show and work with a show stable. This led him to a permanent position in the Morgan horse industry.

As he grew more knowledgeable and skillful, his career path led him to Broadmoor. Fascinated with their ability to fine tune and develop competitive amateur and horse combinations, the pure joy and willingness of Dwayne’s and Mike’s horses led him to join their team.

John’s intentions as an aspiring trainer, are to compete successfully at the world level with Morgans. 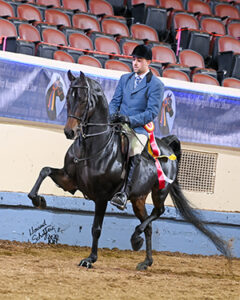 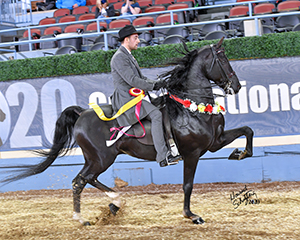